Acoustic and Electric guitar layers, piano, percussion...
Ambient and Rythmic, intricate layers of music unfold into different
movements in extended CD versions.
Some pieces may be considered as "Vertical Music" while they can
take one on an inner journey. 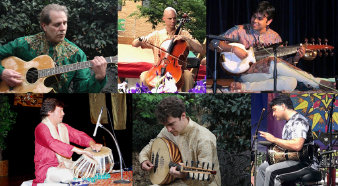 Duets with Joe Leone & Souryadeep Bhattacharyya
Thinking Out Loud
Sweet Love
Circle of Hope
The Child Did Ask
"The Child Did Ask" (an animated music video) (click photo to view)
The song is about a deep journey of self-discovery and contemplation; about happiness and life. Both Joseph and Souryadeep are part of the world music groups...
Available on cdbaby: https://store.cdbaby.com/cd/josephleone
Joe Leone - guitar
Souryadeep Bhattacharyya - sarod
Jeremy Raj - oud and cumbus
Louis Romanos - percussion
Rob Sutherland - cello
Jeffrey Lidke - tabla

Gypsy At Heart has created their own unique style of rhythmic-acoustic sounds that are based around a fresh musical vision. Their music draws upon many genres from traditional Indian Ragas and Middle Eastern scales to hints of Latin, Celtic, European Classical, Jazz, and American Folk. Original compositions take audiences on a musical journey; blending improvisations that are spatial, and beautiful; flowing into movements that are breathtaking in intricacy and speed. Gypsy At Heart has been mesmerizing their audiences with unique soundscapes, arrangements and captivating melodies... Consistently praised by audiences as one of the "Must See Live Acts!"

At the core of Gypsy At Heart, are two accomplished musicians and composers: Joe Leone on guitar and vocals, and Souryadeep Bhattacharyya on sarod (banjo meets sitar). Their shows vary from intimate duo performances to a full group experience with oud, tablas, cello, and an array of hand percussion instruments.